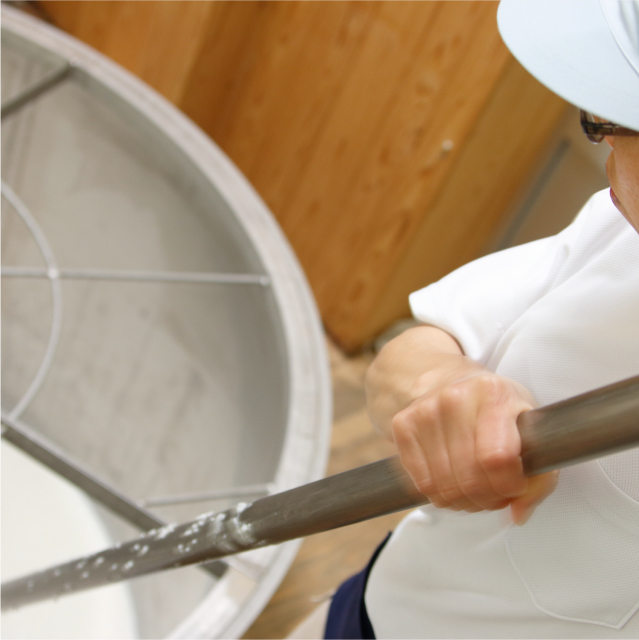 Sake is a fermented alcohol, like beer or wine, but with a more complex fermentation process.

Whiskey and brandy are distilled types of alcohol. Japanese Sake, like beer and wine, is a fermented alcohol and although they share this in common, the fermentation process is quite different. Perhaps it is this difference that gives Sake its unique flavor and the mystery surrounding Japanese Sake. See below for more information.

Brewed beverages include sake, wine and beer etc. however the fermentation process varies greatly among.
In particular, the two-stage conversion, in which (1) the koji enzymes convert the starch in the rice into glucose (molding) and (2) the yeast converts the created sugars into alcohol (fermentation) occurs simultaneously in the same moromi tank.
This process under which molding and fermentation occur at the same time and in the same tank is called multiple parallel fermentation and this is relatively unique to Japanese sake.
Wine, another brewed beverage is brewed from grapes, which are full of sugar therefore does not require such as complex process.
Beer, like Japanese sake is brewed following molding and fermentation processes however this processes occur separately and are not simultaneous.

Amino acid level refers to the amount of amino acids, such as glutamic acid, found in sake and has an effect on the crispness of the flavor and how easily it matures. The amino acid level is an important element which determines the sweetness, richness, acidity and bitterness of Japanese sake. In general, high levels indicate a more full-bodied, richer flavor, while low levels indicate a lighter, cleaner taste. High levels of amino acid also mean the sake will mature easily.

Koji is made by cultivating koji mold on rice or wheat. The enzymes produced by the koji mold break down the starch contained in the rice into glucose (which the yeast then converts into alcohol and CO2). There are several varieties of koji spores used to produce fermented food products. The variety used in the production of Sake is a variety known in Japanese as Kikoji (yellow koji) it comes from the spores of a bacteria called Aspergillus oryzae. Kikoji is also used in the fermentation of soy sauce and miso paste. Shochu is made using Shirokoji (white koji) while Awamori is made using Kurokoji (black koji).

For example, a rice polishing rate of 60% indicates that the outside 40% of the grain of rice has been milled away and just the remaining 60% of the grain used in the brewing process. Rice that is suited to brewing has a large grain with a large starch content in the center of the grain.

Brewer’s alcohol is a tasteless, odorless alcohol fermented using the starch in rice, potato or corn which is then distilled to give high alcohol content. Adding brewer’s alcohol can creates a more vibrant fragrance and clean taste.

During the production process Japanese Sake is generally pasteurised twice, once before it is matured and then again following the maturation period (directly before bottling). This requires heating the Sake to approx. 152°F (67°C) which neutralizes the enzyemes and stabalizes the Sake for shipping.

Un-pasteurized Sake, such as “Funaguchi”, skips this process and is bottled straight after the Sake is pressed giving it the rich lively flavor unique to freshly brewed Sake. Sake that is allowed to mature without being pasteurized however is the pasteurized just once prior to bottling retains a fresh vibrant flavor achieved during the maturation period.